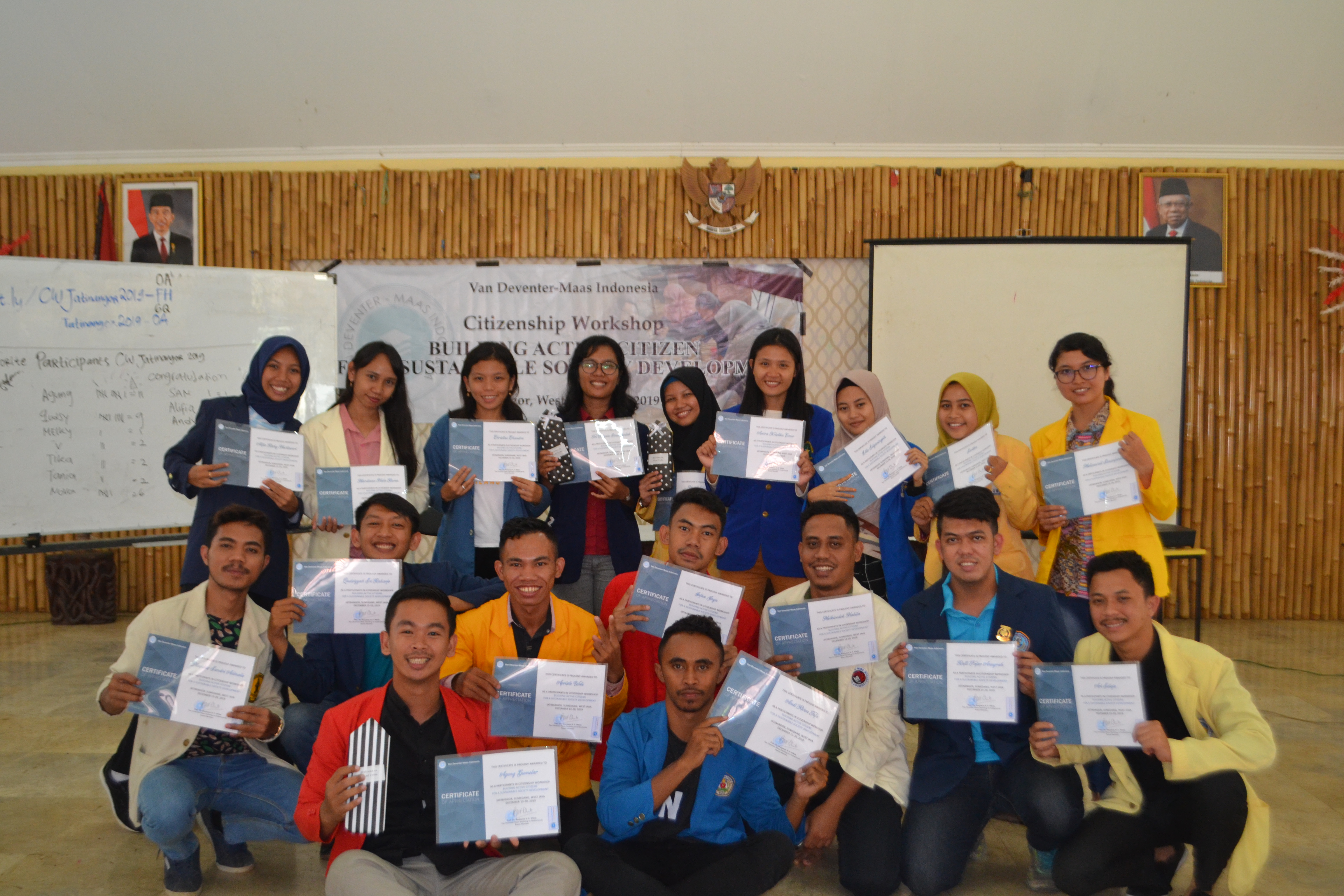 Citizenship Workshop (CW) Jatinangor was the closing event of VDMI capacity building events in 2019. As the other CW before, the theme of the event is Building Active Citizens for a Sustainable Society Development. In the first day, the participants started with a morning exercise. The morning exercise is important to maintain the participants’ health condition. Moreover, this CW lasted for 6 days which is a day longer than the other CW before. Another thing that is different from the previous CW was the facilitators. In the CW Jatinangor, there were three facilitators while the previous CW only had two facilitators. It is expected that the three facilitators can build students’ awareness of their roles as agents of change in this country.

As always, the participants sang the national anthem of Indonesia, “Indonesia Raya”, in the opening session. After that, Luluk Shoviana, the Capacity Building Officer of VDMI, provided the welcoming speech along with the explanation of the history of VDMS/VDMI. In the first session, participants were facilitated by Dr. Jenny Ratna Suminar to be active citizens who can create significant changes in communities. The students were divided into four groups. Two groups were assigned to try to earn money by themselves. The other two were assigned to interview local people and analyze local problems. The second facilitator, Ani Fegda highlighted the importance of self-understanding in achieving goals. Ani Fegda guided the participants to do self-help practices such as self-recognition, self-rewarding, as well as contemplation. Psychological assessment tools were used to explore the participants’ potentials, strengths, and weaknesses. It is expected that after the session, the CW Jatinangor participants understand their characters and qualities so that they know what they can contribute to their communities. The third facilitator, Ferdinand, proposed the alternative meaning of “Radicalism”. Nowadays, radicalism is defined in a negative way such as terrorism. Ferdinand suggested that to be radical is a must if we want to make radical changes in this country. Ferdinand also provided some examples of the national figures that radically change Indonesia for the better. The participants are expected to find extraordinary solutions for problems faced by this nation.

VDMI values, missions, and programs were highlighted by Ibu Parche Manoto in her session. Furthermore, one of the big concerns in Indonesia is the students’ literacy. To address this issue, VDMI provides a program called the Excellent Writing Club. Through the session by Luluk Shoviana, Writing is Fun, the participants were introduced to the program and informed how the program could benefit them in the future. Luluk highlighted that VDMI always thinks ahead in providing capacity building programs for grantees. All of the programs are carefully designed to make the grantees of VDMI stand out among their counterparts in terms of intellectual qualities and soft skills. This writing session aimed to encourage the VDMI grantees to be more active in writing.

In this CW, Dadang, the secretary of the Cilayung Village, explained the local potential that may provide insight for the participants on how to develop their local communities. In the “Local Exposure” session, participants were divided into 4 groups to explore local community potentials. The participants visited chicken farming, bamboo craft, farmers’ community leader, and a small business enterprise that produces Muslim cloths. The session is designed to provide insight for the participants to be applied to their communities in their hometown. On the fifth day of CW, the Blink Learning Center facilitated the outbound training session. The participants engaged in several fun games which aimed to build their teamwork, empathy, and initiatives.

Start from the second day, a day at the CW Jatinangor was ended by art performances. The participants were grouped based on their traditional cultures which are NTT, Java, Minangkabau, Batak, Dayak, and Bugis. At the end of the event, there was “the best participants” election which then received prizes and certificates. There were three winners invited to the front to receive the appreciation. The best participant (based on the participants’ vote) was Agung Gumelar from UNHAS. The best participant (based on the committee’s vote) is Tri Octania Simanjuntak from UNTAN. The live quiz winner is Nova Adintya from State University of Semarang (UNNES). After the closing remarks, participants had a chance to do city sight before they return to their original city and be active citizens in their hometown.