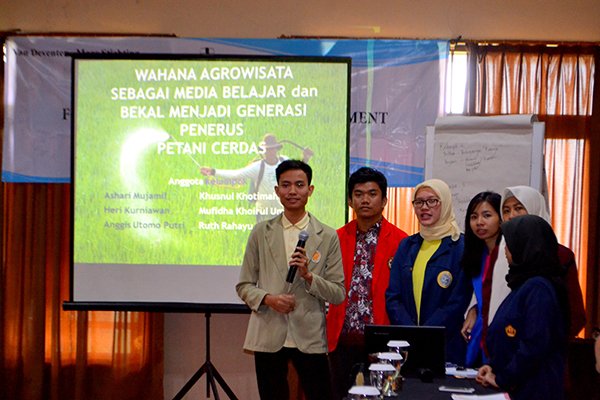 The workshop was joined by 22 participants from all over Indonesia (Padang, Medan, Makassar, Gorontalo, Manado, Banjarmasin, Yogyakarta, Bandung, Bogor, Surabaya, Semarang, Ende, Kupang, and Salatiga) which equally means that it was also joined by students from various Indonesian universities. These selected participants were given travel and accommodation grants by VDMS. During the workshop, several highly-credible and influential speakers were invited as speakers, namely Mr. Ferdinandus Hindiarto, S.Psi, M.si, Mr. St. Kartono, and Dr. Jenny Ratna Suminar, M.Si.

On its first day (12th December, 2017), the workshop was official opened by Mr. Ben White who talked about VDMS’s profile. After that, it was continued by Mr. Ferdinand’s first session entitled “Why to be an citizen is important?” The next day (13th December, 2017), Mr. Ferdinand delivered his second session entitled “Communication Skill”. The participants were very enthusiastic about these sessions. At one point, Rian from Banjarmasin, said: “I am very motivated by the materials you have delivered to us. This chance will surely be a valuable experience in my life. Thank you very much to the valuable lesson.”

On December 14th, the workshop was continued with two agendas, namely Local Exposure and Pak Kartono’s session, “Writing Skill”. In Local Exposure, the participants were invited to see directly some phenomena in Wates Village of Semarang Regency. Specifically—parallel with the names of the group into which the participants were divided—they are cultural, agricultural, animal husbandry-related, and home industry-related phenomena. Concerning these, the participants were invited to find out their potency, problem, and possible solution. After Local Exposure, the workshop was continued with Mr. Kartono’s session which gave insight on the craft of writing. Each of the participants was to propose a title which would then be evaluated by Mr. Kartono according to its factuality and compatibility with the phenomena participants saw earlier. Through this session, Mr. Kartono was able to open the participants’ mind and train them on the spot about how to write well. Heri Kurniawan from UNHAS, said about Mr. Kartono, “His spirit as an educator amazes me. [Despite] his simple appearance, he inspired us that to be an educator [you] do not always have to stand and lecture in front of the class. In his view, [since] an educator presume to educate his/her students, then s/he has to also actualize him/herself. One of the way is through writing. Through writing he can improve on his intellectual ability, and consequently his social stature. Hundreds of his articles have been published both by local and national newspapers. He has also written more than a dozen book on education, a topic he loves so much. This is what a teacher supposed to be: giving examples and be a motivator to his/her children. A teacher should be inspirational.”

On the fourth day (December 15th), the workshop was continued with the third speaker, Ms. Jenny. Her sessions were on “Influence Skill” and “What we shall do as a citizens in a Social Community” and were divided into two days, the 15th and 16th of December. At the start, the participants were asked to write down their dreams in the upcoming 5 – 10 years and to tell the others about it. After that, the participants were divided into 6 groups and told to decide what the current Indonesia’s biggest problem was. Following that, the groups were asked to confirm the result of their discussion in the hotel premises and then they were asked to present it. Concerning Ms. Jenny’s session, Brigita, a participant from UNDANA, Kupang, says to her “I feel very lucky to be here and follow all of your sessions because I feel very motivated to develop my less-developed home village.”

On the last day (December 16th), the participants presented the result of their Local Exposure. Aside from that, The Best Participant of the workshop was also announced. With (1) Focus, (2) Thinking to Action and (3) Respect each other as the criteria, Mufidha from UNAIR took the award home. In addition, VDMS also gave appreciation to Brigita from UNDANA for being the first participant who sent her application. Lastly, all the participants were given certificate from Mr. Ben and the workshop was closed with a video screening by the participants as a token of their gratitude to VDMS. The title of the video was “Berbeda tapi Tetap Satu” (“Unity in Diverity”).

Thank you VDMS for choosing us. The workshop opened my eyes and the others to become more visionary. It also taught us how to be active citizens.