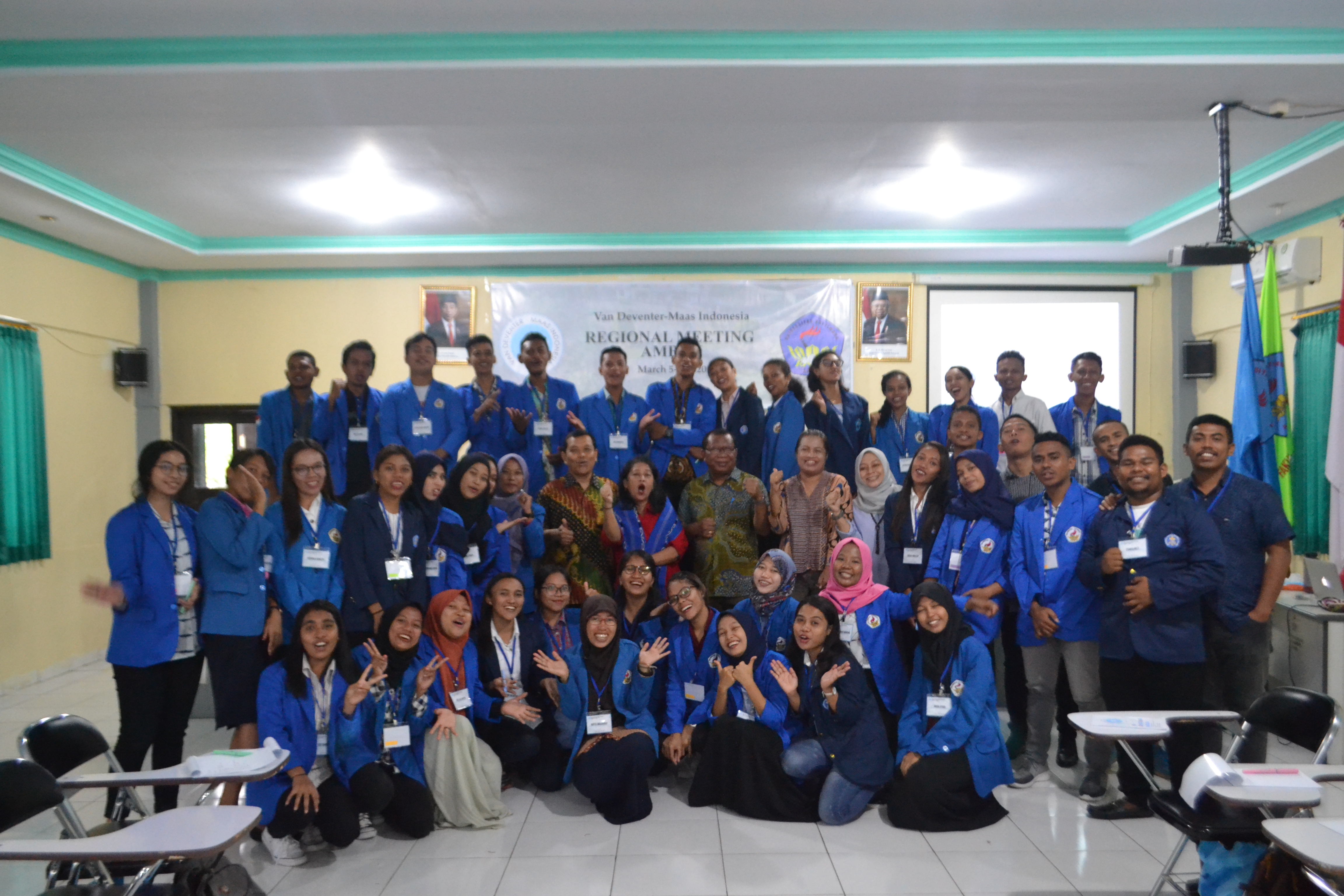 On March 5th to 7th, 2020, Van Deventer Maas Indonesia (VDMI) held Regional Meeting (RM) I in the Economic and Business Department, Pattimura University, Ambon. The participants consisted of VDMI grantees from Pattimura University (33) and Christian University of Indonesia Maluku (11). The RM I is designed to enhance students’ soft-skills and networking. The RM I Ambon was opened by the Vice-Rector I of Pattimura University, Prof. Dr. Fredy Leiwakabessy, S.Pd., M.Pd. He suggested all of the participants be grateful and not wasting opportunities provided by VDMI. Next, Ibu Pariasih Manoto, VDMI office manager, provided an overview of the history and progress of the VDMS-VDMI. Ibu Parche suggested the participants value the spirit of Coen Van Deventer dan Betsy Maas in supporting education in Indonesia. Also, she encouraged students to dream high and keep their dreams in the face of challenges. Also, one of the board members of YVDMI, Bapak Kuswandono, Ph.D. attended this event. In his session, he discussed that Education in the 21st Century should prepare students for the future. He highlighted that in the future there will be more human jobs replaced by robots. VDMI grantees should start to develop their soft skills and hard skills so they can face job competition in the future.

To inform students about VDMI scholarship regulations, the Scholarship Administration System (SAS) was explained by Alip. Also, the Student Monitoring System was discussed by the participants moderated by Ibu Parche and Dios Larosa, VDMI Alumni communication and Relation Officer. Furthermore, in the RM I Ambon, VDMI provided two facilitators to motivate the participants. The first facilitator is Bapak Ibnu Suryana. He explained that leadership can be started by becoming a responsible individual. Also, he asked the participants to define the goals of VDMI which are building the students’ character and intellectual to be independent and have a high moral standard.

The second facilitator, Anggoro Mukti, delivered a session named ‘Dibalik Tirai Sarjana’. He highlighted that success starts from us. People around us may encourage us or diminish us. He told his personal experience with his family who never believe that he could be a motivator. However, he has a strong willingness to prove to his family that he can become a motivator. Furthermore, he provided a simulation of a job interview by dividing the participants into two roles, interviewers and incumbents.

The final session is the socialization of the Excellent Writing Club (EWC). The EWC is an online writing coaching provided by VDMI to improve the writing skills of VDMI alumni and grantees. At the end of the event, the participants provided comments and feedback for facilitators and the RM I Ambon in general. The participants expressed their gratitude for the opportunity to attend the RM I Ambon. After that, they sang the “Kasih Ibu” song, an Indonesian song which tells about the greatest love that a mother has to their children. This song also portrays the sincerity of the VDMI scholarship, which supports the grantees without expecting them to give back anything to VDMI. However, they are expected to give back to Indonesian society for the better Indonesia.